Who would you be without your body? How does your body influence who you are and what you do in the world? How does your identity shape the very flesh you inhabit? We sought out to begin to answer these questions and more, in three very different manifestations: clothes, sex, and space. 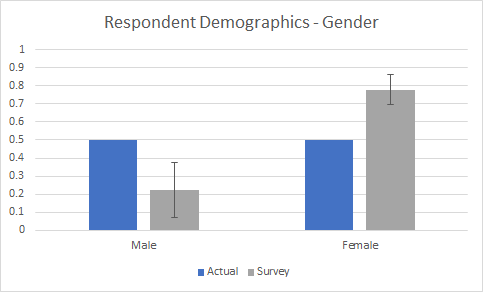 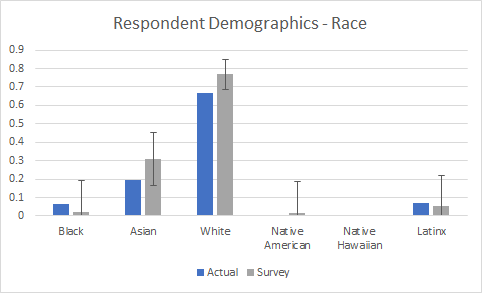 In our survey, we asked respondents to consider different factors in determining what clothes they choose to wear in different contexts. Specifically, we asked about the contexts of party/nightlife, class, dorm/hanging out, and work. Though we surveyed students about multiple factors, the one that produced significant data was the factor of sexual appeal.

61% of women reported that they took sexual appeal into consideration when deciding what to wear to a party, compared to only 42% of  men.

This disparity in the way that men and women present themselves in the context of nightlife has interesting implications. The data may be affirmative of the societal pressures and high standards for women’s physical appearance that they so often report. Especially in contexts such as parties, women are socialized to associate beauty with sexuality; therefore, in order to appear beautiful and confident, many consider sexual appeal in their outfit choices. This does not mean that women are dressing for the male gaze; rather, this socialization is internalized. Many women feel more attractive and confident in sexually appealing outfits because they have been socialized to associate beauty with sexiness.
Additionally, men appeared to be more aware of their sexual appeal in the workplace than women, with 13% of men reporting that they took this factor into consideration when dressing for work, while only 4% of women considered this. This disparity may be useful in helping to explain the prevalence of workplace sexual harassment faced by women. According to the Women’s National Law Center, nearly one in four women experience sexual harassment at work (Preventing and Addressing Workplace Harassment, 2015). Although most women do not report these incidences, the gender disparity in reporting indicates that women are much more likely to face sexual harassment at work. Of the more than 10,000 sexual harassment cases brought to the U.S. Equal Employment Opportunity Commission and state and local Fair Employment Practices Agencies, only 18% were brought by men (Preventing and Addressing Workplace Harassment, 2015). By dressing more conservatively and with less sexual appeal at the workplace, women may be attempting to mitigate the sexual harassment they receive (although no woman, despite their dress, can always be exempt from harassment). This is a consideration that is much less salient for men.

It is a commonly held belief that men orgasm more frequently during sex than women. Our survey confirmed this belief among the Tufts students who responded. 91% of male respondents reported that they had an orgasm, about half the time, most of the time, or always when they had sex. However, only 41% of women reported the same. 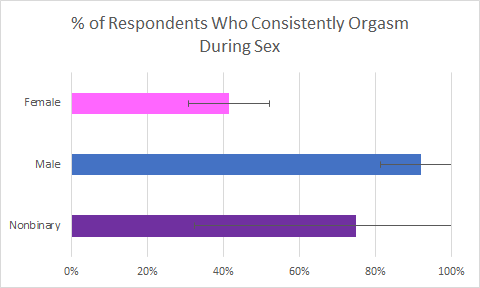 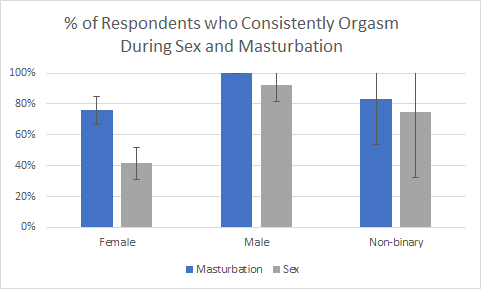 As explored in Armstrong, England, & Fogarty (2012), especially in hookups, a woman’s entitlement to pleasure and orgasm is questioned, whereas a man’s is not. In addition to lack of comprehensive sex education on female reproductive anatomy and physiology as it relates to orgasm, the result is fewer female orgasms during sex. Furthermore, our survey found that men masturbated more frequently than women, with 92% reporting that they masturbated more than once a week, compared to only 39% of women. 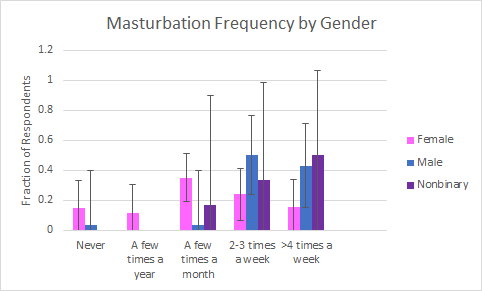 The right to presence and space is an extension of a person’s power. With power often comes ignorance of this privilege. Therefore, we hypothesized that being aware of the space one is taking up may be correlated to the institutional power one holds. Specifically, we were interested in how gender and race, two dimensions that give certain groups disproportionate institutional power, may affect the awareness of presence. Surprisingly, our survey found no significant correlation between race, gender, and the frequency of awareness of presence. Tufts, however, is known for its left-leaning politics; it is likely that many of its students have on some levels examined the power and privilege they hold and therefore be aware of the space this awards them. This could be an explanation for the lack of correlation found.

In popular culture, the practice of “manspreading” is a very visible act of taking up space. Manspreading is defined as “the practice whereby a man, especially one traveling on public transportation, adopts a sitting position with his legs wide apart, in such a way as to encroach on an adjacent seat or seats,” and is often seen as a manifestation of structural patriarchy, in which men are afforded more space and power than women (Manspreading, n.d.). Although this practice is not exclusive to men, our survey found that men were much more likely to frequently spread their legs on public transportation than women. 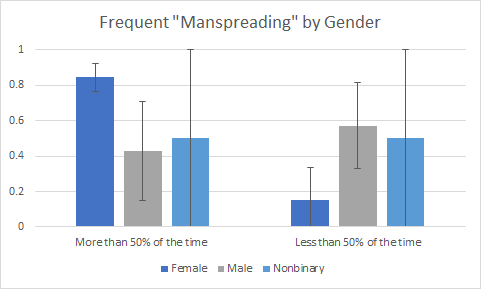 Men hold more institutional power than do women, and therefore may feel more comfortable taking up more physical space in shared environments. Race, however, was not found to influence the frequency of manspreading.

This analysis serves as a starting point for further research investigating the relationship between identity, presentation, and pleasure. Now that some of these patterns have been discovered, future research should focus on qualitative research to investigate the rationale that may be behind these trends.

While the data collected in this survey was interesting, it is difficult to extrapolate to Tufts as a whole because it was not directly representative of the Tufts population. As seen in the demographics figures, a greater percentage of respondents were female or white than are present in the Tufts student body.

In order to draw more generalizable conclusions, a more representative survey must be designed and executed.