While armchair activism accounts for the physical engagement a participant has in an activist movement, we felt that the definition did not quite capture the intentions of Tufts Student Action. For our purposes, we operationalized activism as either “direct” or “indirect.” Direct activism is any action that has an immediate outcome upon the movement. Indirect activism, on the other hand, is an action intended to spread information to friends and peers in order to get other people to contribute to the movement. For example, signing a petition would normally be considered a form of armchair activism, since the participant does not need to put any physical effort into getting involved. However, signing a petition would be considered direct activism, since it has an observable, and more easily quantifiable effect.

Furthermore, as observed through our data, Tufts Student Action pushed for some forms of direct forms of activism the most, such as the petition and the email model for President Monaco.

Significance of the Petition

58% of people responded that they had signed the petition for Tufts University to stop tuition hikes. Two factors seemed to stand out in regards to the success of this act. First, the petition was presented shortly after Tufts Student Action brought the issue of the tuition hikes to the attention of students. Second, the petition was easy for students to engage in. It was made available online, and spread through the student body via social media. The takeaway, then, is that both latency and accessibility play a significant role in how likely a person is to engage with activism. 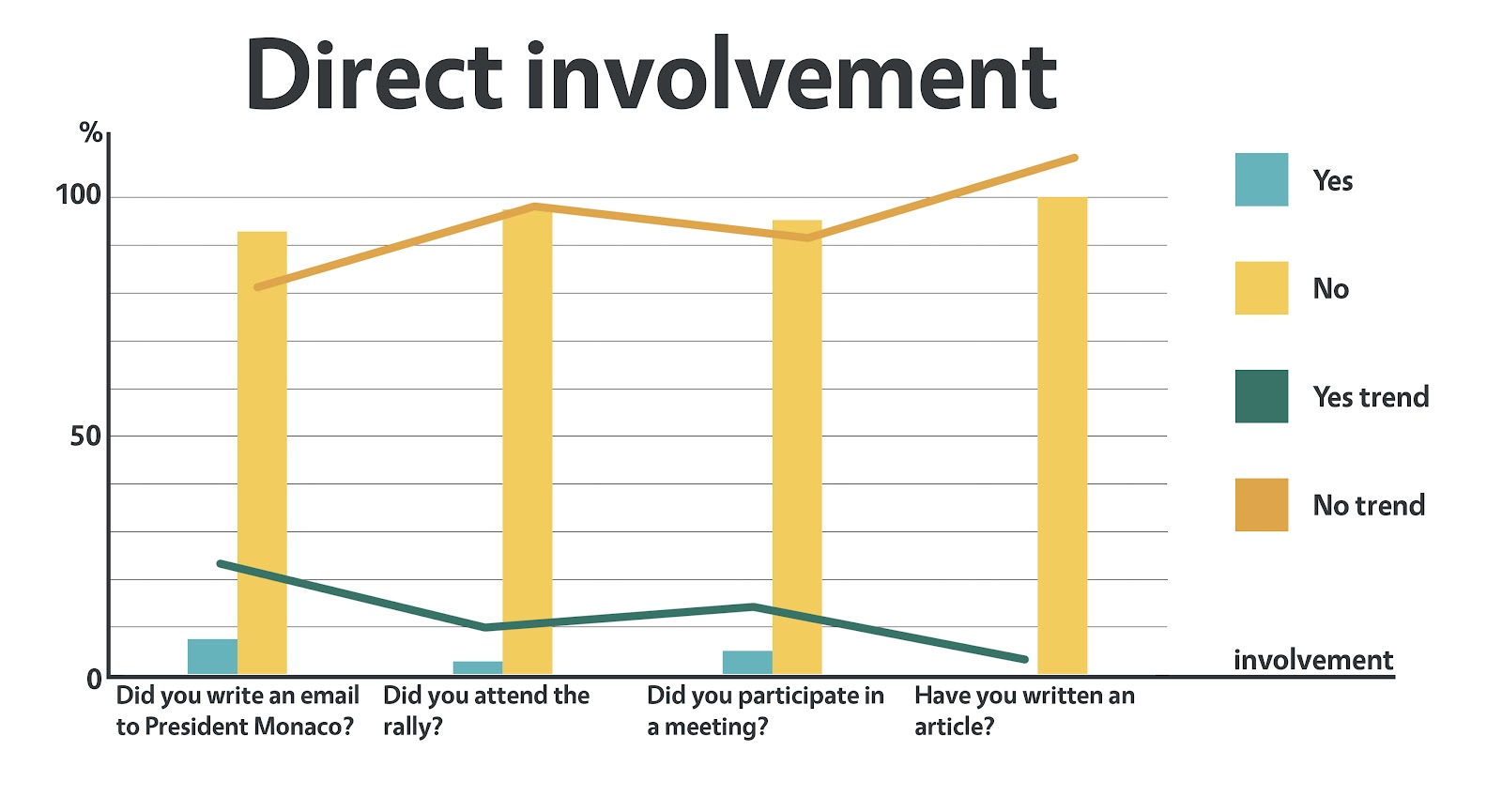 As shown in the infographic, there is a downward trend in terms of direct involvement to raise awareness about the tuition hike issue. In our survey, we asked 4 questions about direct involvement in this issue. The first of these questions asks whether the student has emailed president Monaco (based on a pre-written template), which involves relatively little effort compared to the rest of the questions. The next two questions ask whether a student has participated in a meeting or a protest on campus, which requires slightly more effort. The last question regarding direct involvement asks whether the user has written an article for the Daily to raise awareness; this question is considered the most involved out of the whole set.Thus, it is not that there is a downward trend in terms of different degrees of direct involvement. Even so, there is still little involvement, even when the activity requires relatively little effort (such as emailing president Monaco). The downward trend simply indicates that people are less likely to take part in activities with higher degree of involvement. However, the clear indication that there is slacktivism at play is the disparity between the number of students who directly contributed versus the students who opted for more indirect forms of activism, such as signing the online petition. 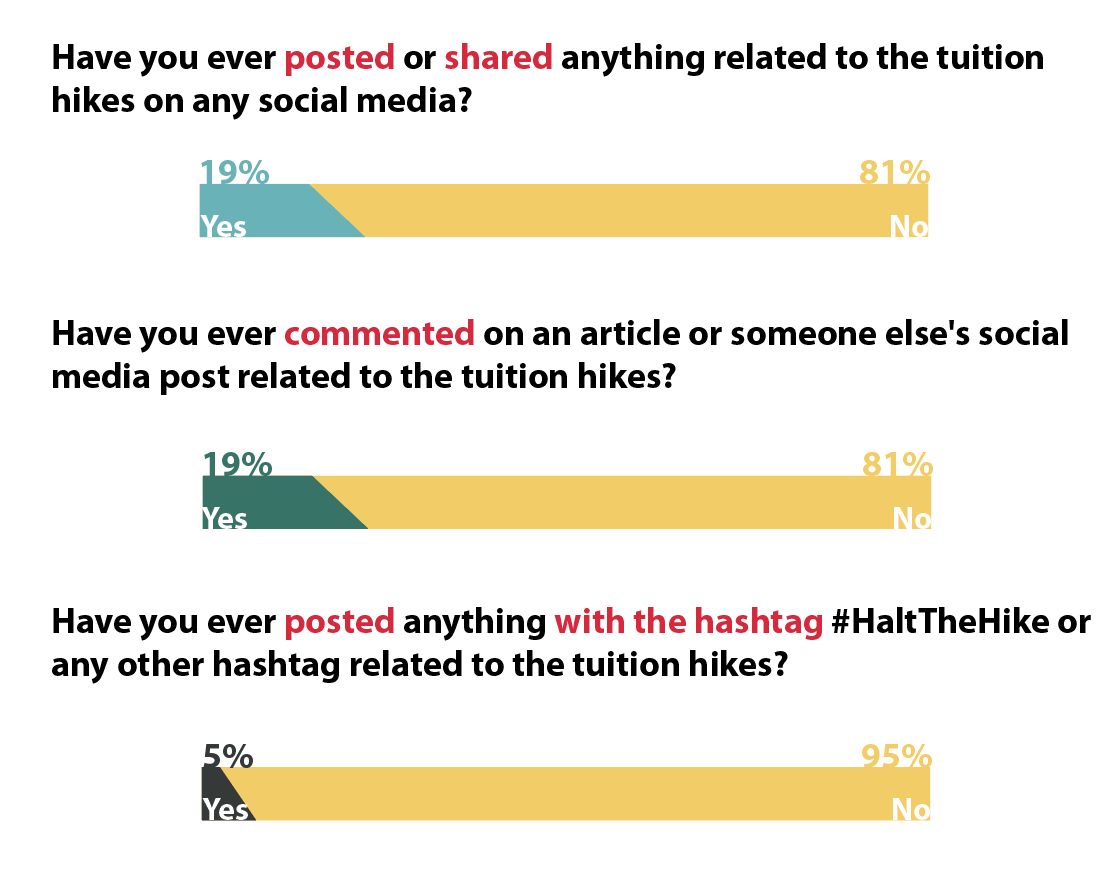 According to our survey on the tuition hike issue, the general rate of indirect participation, including posting or sharing related material, posting with hashtag for the cause and commenting under related posts on social media sites is greater than that of direct involvement methods: 19% respondents posted and commented, higher than the participation rate for direct involvements including going to rallies or meetings, both with participation rates under 10%. This discovery suggests that people would rather take actions to promote or show support for a cause online than in reality.

Understanding the Impact of Armchair Activism

There could be many reasons behind such tendency, for example, people might have not enough time for direct involvement, or they simply are not devoted to cause to the extent of wanting to make greater effort. Indeed, indirect involvement is much less time consuming and easily accessible. In addition, posts on social media platforms are considered especially effective in spreading the word in the community. Student organizations such as Tufts Student Action often choose to use social media to raise awareness and broadcast their demands. With that being said, posting opinions on the issue online is the first choice for many people. However, while they voice their support by typing a couple lines and clicking the mouse, they are perhaps unaware or unconcerned of the influence their speech would have on helping to make a change. While such influence is also hard to measure in our case, we tend to extract people’s attitudes toward the issue and the nature of the issue looking at their particular choices. 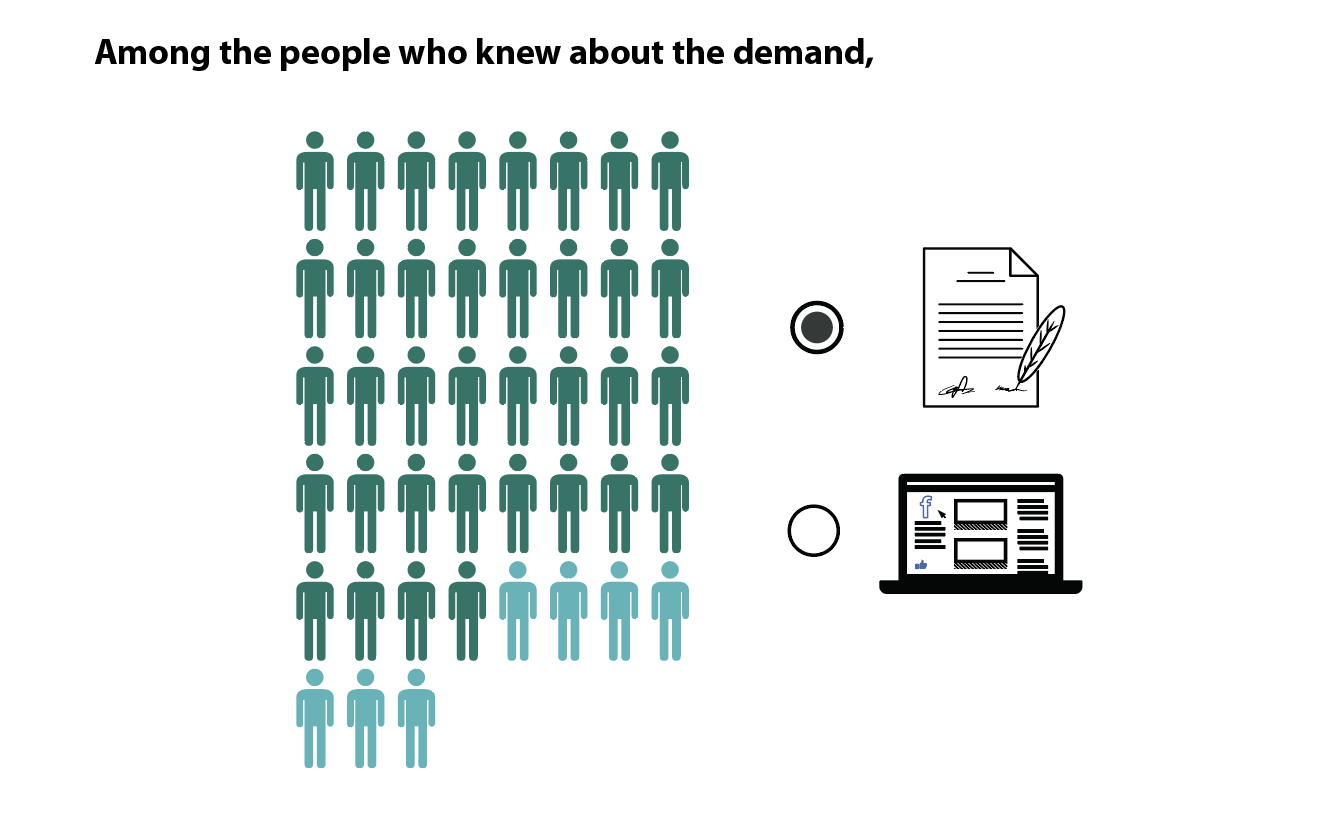 To begin with, among all 74 respondents who knew about the demand TSA drafted on stopping the tuition hikes, 36 respondents signed the petition to stop tuition hikes yet did not post anything related online. This could suggests that e-petitions that require minimum effort are essentially problematic in presenting one’s commitment to activism. While sharing the petition to make it available for more people is just one click away, the majority of the respondents did not choose to share the petition on their page. 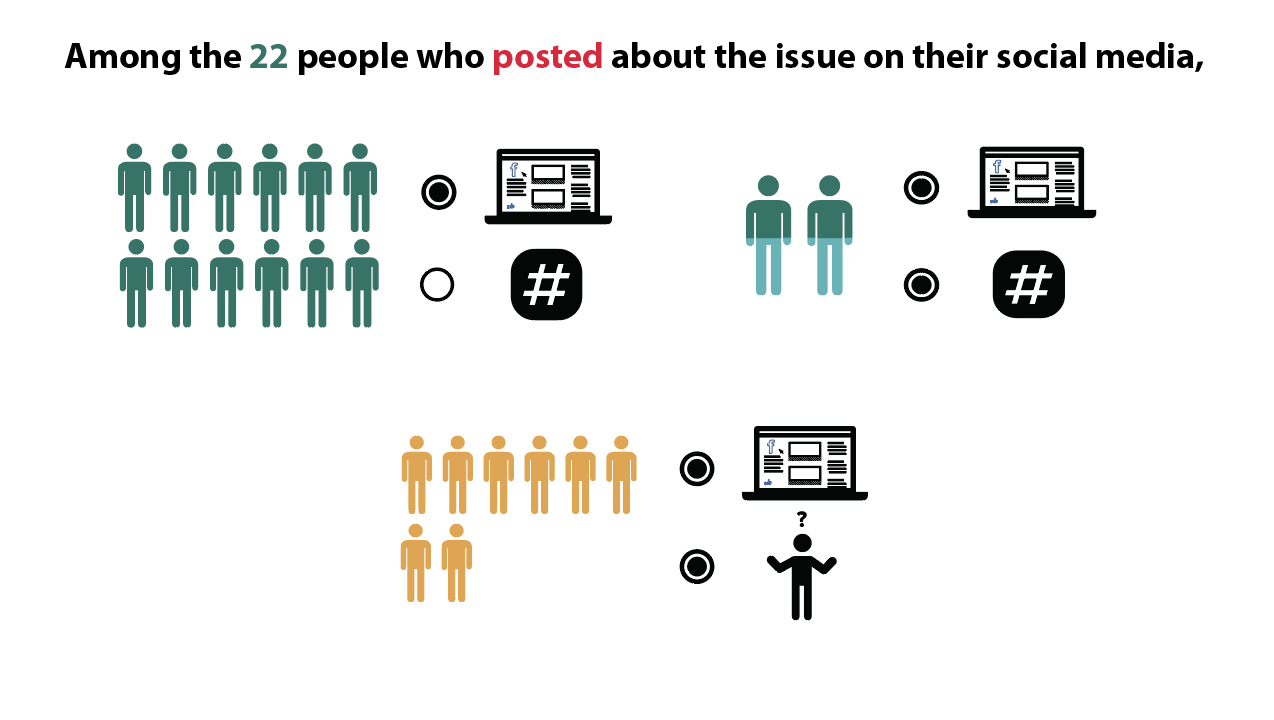 Furthermore, of the 22 respondents who posted about this issue, only 2 posted with the hashtag #HaltTheHike. Among the rest of those who posted, 12 posted without the hashtag and 8 were unaware of the TSA demands, therefore did not really know what they were posting for. This phenomenon is partly caused by the nature of the issue with its purpose easily predictable, but most importantly posting with hashtag opens the opinion to a bigger audience, as it is more searchable, and it also indicate greater degree of devotion from the person posting. 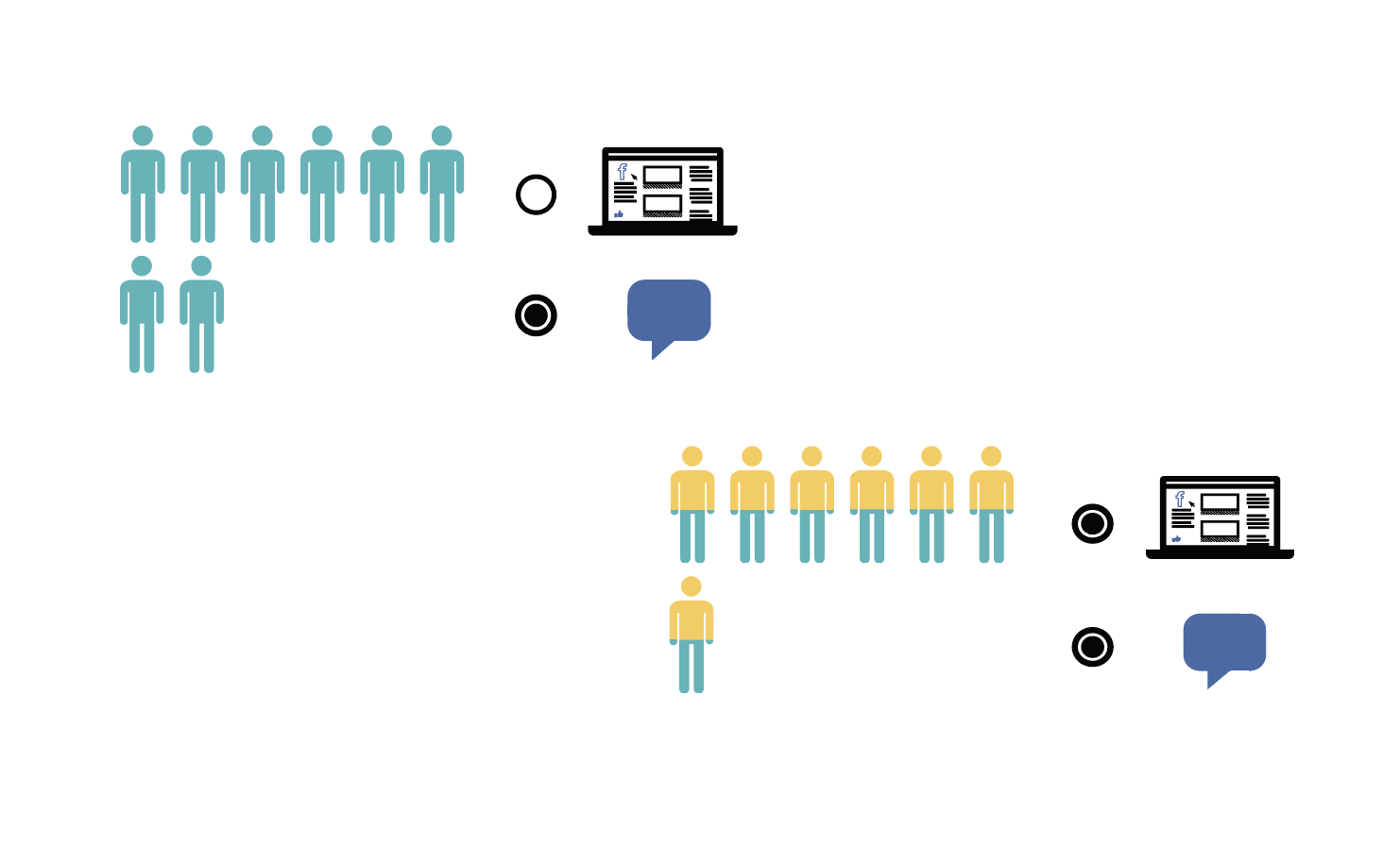 Lastly, most of the respondents who posted about tuition hikes also commented under related posts. This implies a link existing between the two. I had initially assumed that commenting indicates less effort of involvement in activism, yet it seems like people who care about the issue enough to respond to other people’s opinions would generally post to engage in the discussion themselves.

For our last question, we asked respondents if they had done anything else to contribute. The responses were mostly “No,” but some people gave their opinions on the movement. One person responded that they agreed with Tufts Student Action’s message, but felt that the group could not achieve their goal of ending the tuition hike. The lack of confidence in Tufts Student Action’s ability indicates that it might be in the group’s favor to reassure students of how feasible their demands are, or otherwise revise their demands.

Another person responded that they had engaged in all sorts of indirect activism because they could not afford Tufts. The person clearly supported Tufts Student Action’s direction, but never participated or contributed directly to the movement.

We drew two conclusions from the survey data. First, that there is a negative correlation between how direct a form of activism is and how likely people are to participate. It seems fairly intuitive, but the data supports the idea that difficulty and directness could deter people. Second, latency and accessibility of a form of activism can affect how likely people are to participate. The petition, which was presented early on and made easy to sign, drew in a lot of participants.