February 10, 2017: The day Tufts changed forever. The Facebook group “Tufts Memes for Quirky Queens” (hereafter referred to as TMFQQ) was created, the latest in a growing trend of college-related “meme pages” cropping up across the country. It is unclear where this trend began, but their popularity cannot be understated. The Tufts page now boasts over 6,000 students, grad students, prospective students, students from other universities, and even a handful of faculty members.

Thanks to the power of data science, we bring you never-before-seen insights on college memes. All the questions about memes you ever had (and more!) will be answered.Disclaimer: Data used in this article is sensitive and private. Unless explicit permission has been granted, we refrain from releasing specifics. Data accurate through the end of the 2016-2017 school year.

Early in the year, the “Berkeley Memes for Edgy Teens” group, founded by students at the University of California Berkeley, went viral, attracting thousands of students and non-students alike to participate in the page. Inspired, a small group of Tufts students sought to build a similar community of our own. The group grew rapidly, with hundreds of posts made in the first week alone. Over time, activity has dwindled, but Tufts Memes for Quirky Queens has cemented itself as a centerpiece of campus discourse.

Tufts students of all classes post on the page. The makeup of the group is roughly evenly split between the four class years, with freshmen slightly over-represented. However, 38% of all posts come from the Class of 2020. It is yet undetermined as to why this phenomenon exists, but there are a few possible explanations. It could be that, since freshmen are generally much more active on their class pages, they are also active in the other associated groups. It could also be that the younger students have had more exposure to “meme culture” in their upbringing and are thus more comfortable creating and sharing memes. 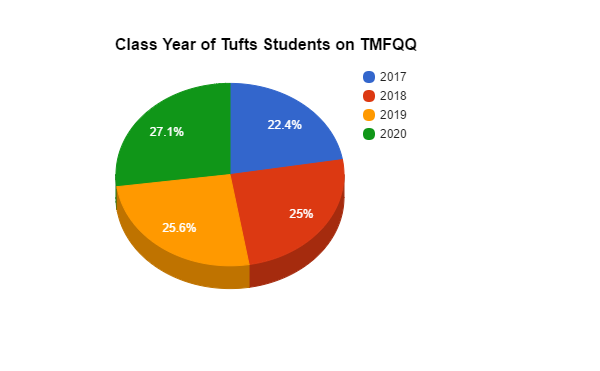 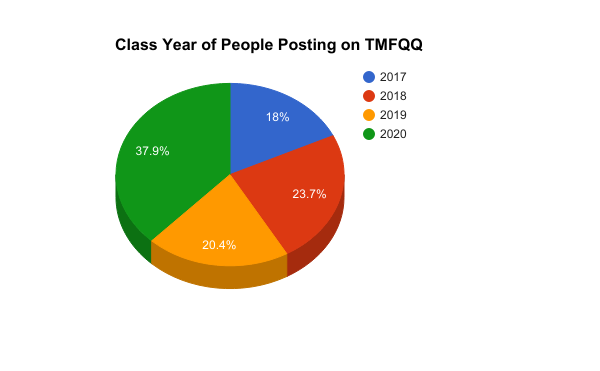 We matched the participants against public information from Tufts in order to estimate the composition of majors, and this breakdown too yields some interesting results. While there were some limitations in getting exact numbers, the general structure of the class holds up. We present below the graduating class majors of 2016 and the majors of those in the meme group. The general composition consists of almost the exact same top-10 majors, but the STEM fields are over-represented and Liberal Arts studies decline in ranking.

Computer Science itself provides an interesting example. It graduated 116 majors in 2016, but there are at least 310 who are in the Tufts Memes for Quirky Queens page, and this number doesn’t include freshmen, who are classified as undecided. The data suggests, for example, that nearly every member of the Tufts Computer Science department is involved in the meme group. 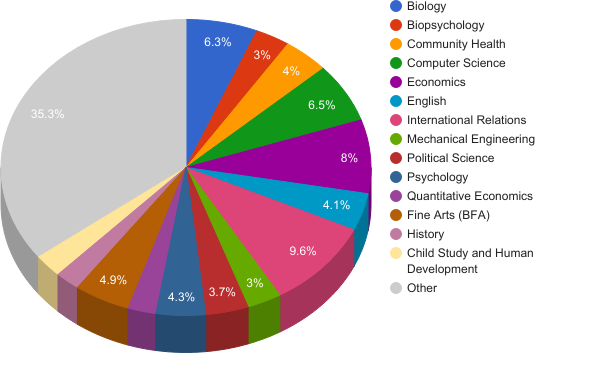 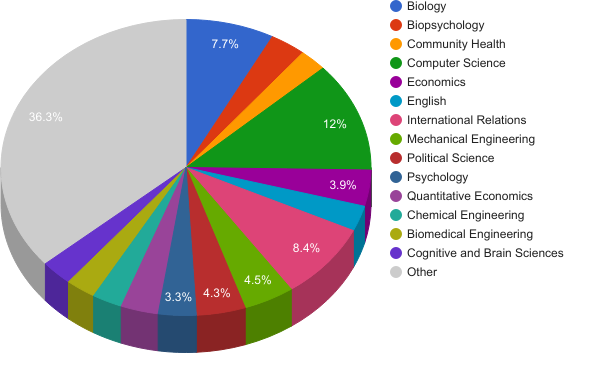 Asking the Experts for Advice

Meme culture has exploded in popularity since the dawn of the internet. We sent out questionnaires to some of the top posters in the Tufts group to garner some ancient wisdom, hoping to figure out how to make the best memes for ourselves.

[highlighted responses have been selected for each question]Q: Why do you want to make memes?“Primarily validation, but it’s also fun to make people laugh.”“For external validation.”“Attention.”“Just for fun!”“We need to be able to come to terms with our various situations, and humor is the greatest way to do so.”“…A part of it was to just improve people’s days. Even if a meme gets 12 likes, it means that you improved 12 people’s lives at least a little bit for that day.”Q: How do you make a successful meme?“Repetition and triviality.”“A successful meme is something that is not too niche but also not too broad.” “Take whatever you’re thinking about and make it ridiculous, or an obvious parody… Have a point, but remember to have fun with it. Successful is subjective; to quote ‘title of show’, ‘I’d rather be nine people’s favorite thing than a hundred people’s ninth favorite thing.’”

Censorship is a highly controversial topic, yet is completely unavoidable amidst the popularity of the memes group. The question remains as to whether the group’s moderators have the right to censor “offensive” memes. If they do have the right, then how do they determine what crosses the line? Especially with all the talk at Tufts about how “free speech is dead”, how can this be decided?

In one particular example, the moderators felt obligated to step up and intervene. Following the passage of the pro-BDS resolution by the TCU senate, a number of posts sprung up on the page, pro-Israel and pro-Palestine alike. Even though many of the posts would normally have been considered inoffensive, the posts blew up with aggressive comments on all both of the issue. In response, all posts related to Israel or Palestine were censored for a few days.

“While we want everyone to speak their voices, we also want this group to last, and we have a rare opportunity to measure the campus zeitgeist. Critiquing an idea through a meme in a nuanced, discussion-inviting way is difficult, and often people’s emotions and intentions are misconstrued through shoddy powerpoint mock-ups.” — Sean Murphy

Our survey turned up some interesting statistics on the subject. Only 32% of respondents stated that they had ever felt offended by a post on the group, yet 60% agreed that offensive memes should be censored. There is quite a split between those who believe memes should be censored and those who don’t, although there is a slight majority towards the former. It is interesting to note that a strong majority of people (68%) have never felt offended by a post on the group, yet there still is the slight inclination towards wanting censorship of offensive memes. This possibly indicates that many people, even though they do not personally feel offended easily, wish for their peers to have an easier time perusing the meme group without feeling attacked.

Additionally, those who chose to expand on their response to the censorship question provided some especially interesting quotes. Responses from those opposed to censorship range from things like “People need to stop being crybabies”, “Everything needs to be on the table”, “When you step off campus the world will not be censored for you”, and countless mentions of “free speech”. Meanwhile, responses from those who support moderation include that it is “basic humanity”, “Everyone should have the opportunity to feel happy and safe”, and the various adamant calls against “hate speech”. Altogether, this question appeared to have some of the strongest opinions, as could probably be expected from one of the most popular topics on campus (as well as in memes themselves).

What kinds of things do people post about, and why?

The meme page is a reflection of the social scene at Tufts. Students post about anything and everything, from Tufts tuition hikes, the “Free Speech is Dead at Tufts” campaign, stereotypes about students with different majors, Greek Life, campus locations, and campus events. There are niche topics that gain a lot of popularity among certain groups, and topics that tend to unite the whole community. Polarizing posts, such as those that reference income inequality among students, tend to receive equal amounts of love and hate.

However, in the end, it appears that the majority of students prefer posts that are relevant to them and make a funny joke. Offensive and polarizing memes are largely rejected by the student body, but many admit to liking posts that align with their political beliefs. Many students also say that they will like their friends’ posts just because it’s their friend who posted it.

In the short span of a semester, we’ve already witnessed turbulent changes in the group and the behavior of its participants. There have been homegrown spectacles like the story of Jamal Wallace, debates on censorship and free speech, and lighthearted commentary on serious social issues at Tufts. What began as a generally carefree and directionless group has now taken on an identity of its own. Generally, students seem to be enjoying the group, with roughly 75% expressing a positive opinion.

Opinion of TMFQQ, by number of responses

The question remains though: will Tufts Memes for Quirky Queens survive as a platform for social discourse? Ultimately, all we can do is speculate. The least active demographic, the seniors, are graduating, leaving room for the incoming freshmen, Class of 2021, to forge their personal identities through memes and in-jokes about Carm vs. Dewick.

For those of you who made it this far into the article, we have a special treat: an interactive graph that shows you which memes are most similar to other memes, based on how often a student who likes one meme chooses to like another. (Be careful, the webpage is large, so don’t open it on a mobile phone unless you’re on Wi-Fi)https://tmfqq.herokuapp.com/simvis

Posts per day through the end of the semester, Spring 2017